Fire up the Smoker

In an era when fly fishing for trout is synonymous with the practice of catch and release, one almost forgets the fact that trout can be great to eat. For all the right reasons, there are many modern trout anglers who have never kept, or even thought of keeping, any of their fish. Why? Because that’s what you do. Simple as that. Generally speaking, those who fly fish for trout release their fish. Many anglers using artificial lures or bait do much the same.

As an outfitter and sportsman, I certainly believe in and subscribe to the practice of catch and release – particularly for wild fish. It’s a simple and effective means of protecting and preserving our fisheries for generations to come. When on the river, I make every effort to take care of the fish – we use barbless hooks at all times, fight fish quickly and handle them at a minimum. If they are to be released, they should go back to the river no worse for wear. And, when such is the case, the love em and leave em approach works. There’s no argument.

This being said, I do find myself wrestling with the plain and simple fact that I truly enjoy and appreciate consuming fish that I have caught. Always have and always will. So…while I have routinely been a hard core advocate of catch and release trout fishing, I have made up for it by harvesting countless yellow perch, walleye, smallmouth bass and pike. I find that such white fleshed fish are so good to eat it’s hard to pass on the opportunity. Trout on the other hand, make it simple – many of them, particularly those caught during the summer months just aren’t the best table fare, at least in my opinion. Yes, a small trout caught from a mountain stream and cooked on an open fire is a treat, but those caught from warmer waters of the valley floor aren’t the same. Which is great….makes them easy to release.

This being said, rainbow trout caught from reservoirs during the winter months are a different story. There are three critical points in that last sentence. Winter months ( cold water), rainbow trout (not browns) and lakes or reservoirs (not rivers or streams)…..these exact fish are hard to beat on the grill or when smoked. As a bonus, In Montana, many such trout are hatchery raised fish that I don’t feel bad about keeping.

Just a few days ago, Jim and I made tracks for a local reservoir with a simple goal – fill the smoker. So we left the Double tapers, 5X tippet and #20 Midges at home and brought out the meat sticks – some old Eagle Claw trolling rods matched with some brightly colored rapalas – a favorite food of early March reservoir rainbows. The plan worked like a charm. We drank coffee, analyzed the peaks and valleys of last hunting season and trolled….trolled until we’d each put our five fish limit in the livewell.

That have been done, I filleted the fish and prepared the brine – a simple concoction. 1 cup Soy Sauce, 1 cup Orange Juice, 1 cup brown sugar, 1 tsp black pepper and 1 tsp ginger. I tripled the mixture and soaked the fillets overnight. About 12 hours seems about right. 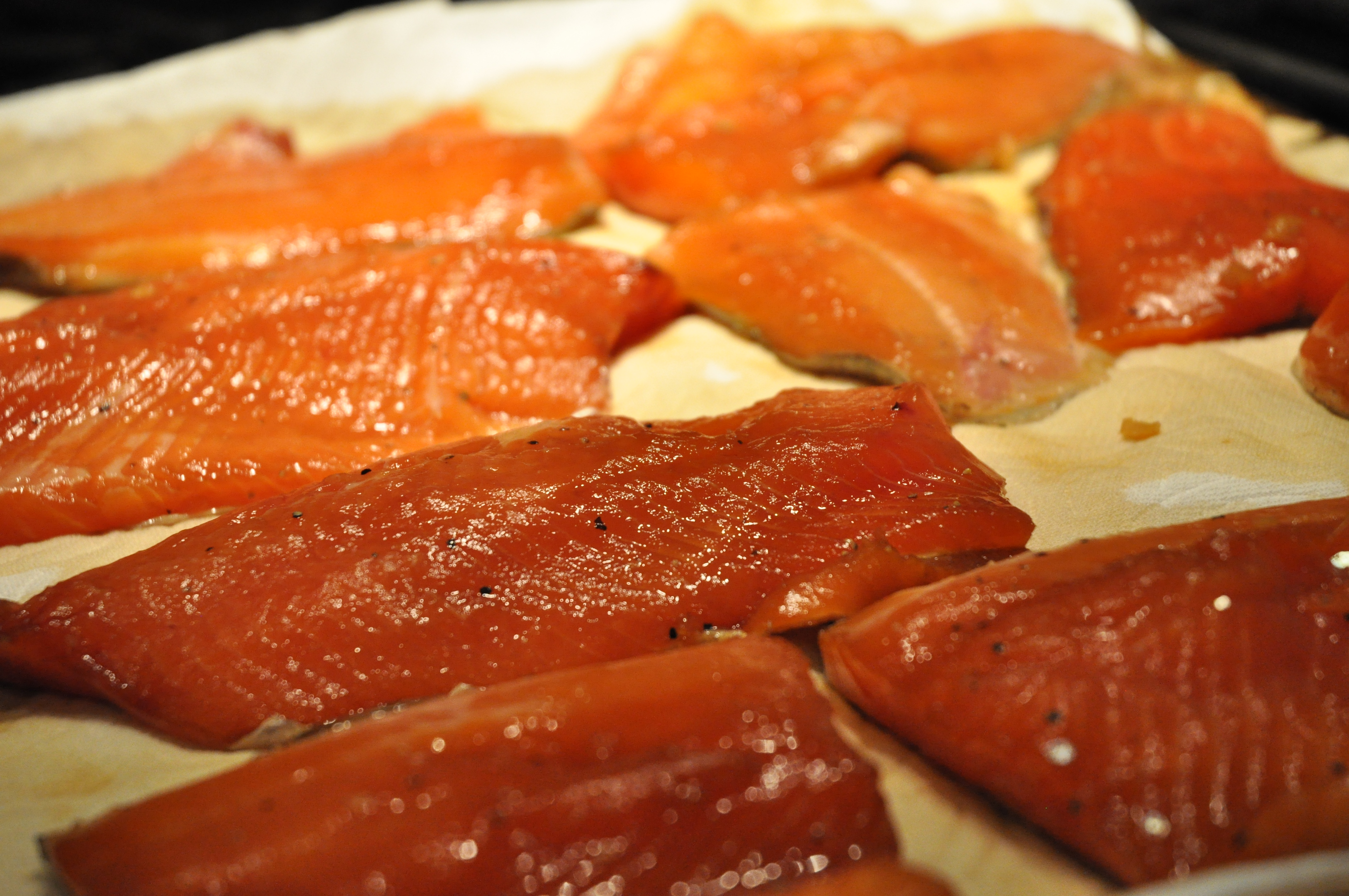 The following morning I removed the fish from the brine and placed on paper towels to dry for about an hour. Once dry and with a nice shine I added some honey on the fillets as well as some cracked pepper  then loaded up the smoker. 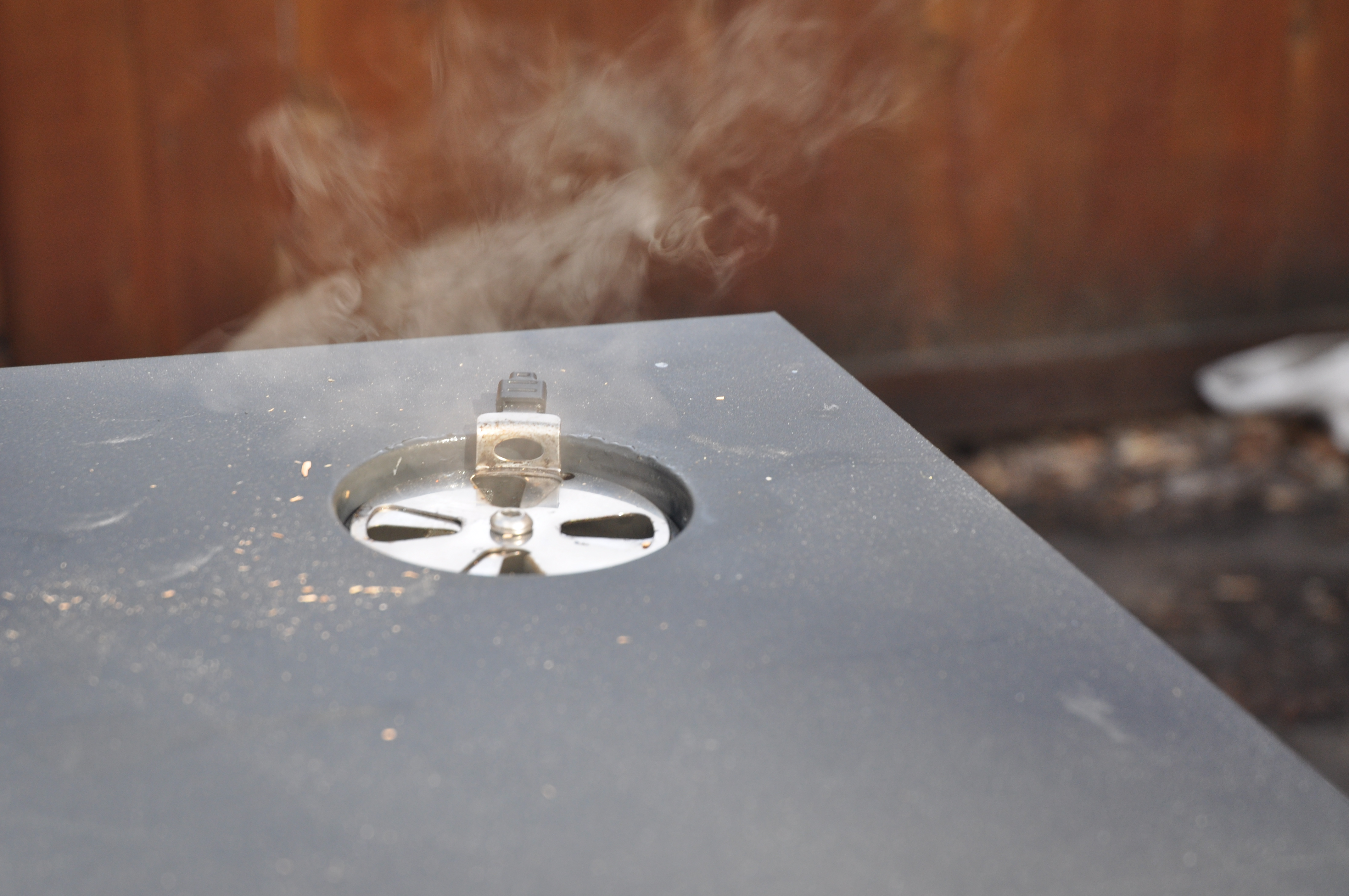 3 hours at 170 degree with 2 pans of hickory chips worked just about right…. 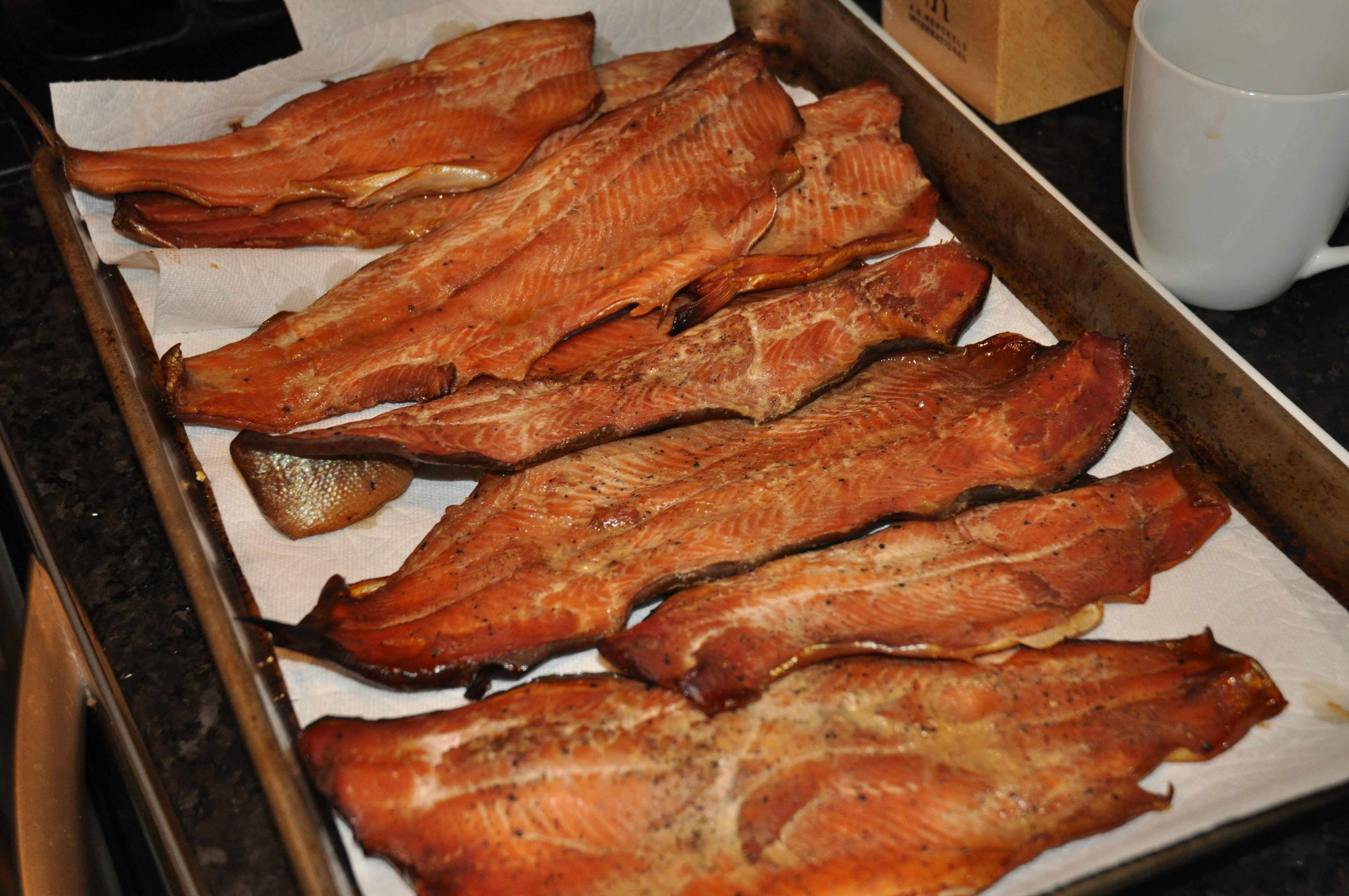 Though I’m still learning the tricks of the trade, these fish turned out well. Just plain or on a bagel with some cream cheese, red onion, tomato and a few capers – oh man – just amazing. So good that it’s gone, long gone. Might have to head back to the lake for another round.