Perhaps the only thing more difficult than predicting spring weather is forecasting insect activity on the river – obviously the two are related and recently they’ve both been all over the map. Just a week ago it was nearly 80 degrees and sunny – rivers were on the rise and we were scrambling for options. For the last three days or more the temperature has hardly broken 50 and we’ve had rain, snow and plenty of wind. From a fishing standpoint, this recent cool down is just what the doctor ordered. Sure, we have spent some time on front of the wood stove in the warming huts at Depuys Spring Creek but while we were doing so, the Yellowstone, that had blown out from snowmelt was dropping and clearing and the Madison, that was fairly unsettled was getting right back into the groove. 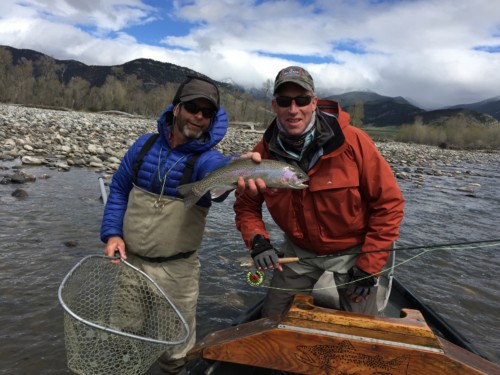 The timing couldn’t be more perfect. This is the caddis window that we hope for but all too frequently miss. As we speak, the bugs are hatching, the fish are feeding and the rivers are in perfect shape to take advantage of an opportunity that, in many years, is a wash due to runoff. This time around it looks like we are in luck, at least all it warms up enough for the rivers to rise. Until then, we should experience some of the most active surface activity that we’ll see all season.

Along with caddis there have been midges, blue winged olives and March Browns – a lot to choose from but nothing that a #14 gray or olive x-caddis hasn’t been able to solve. This simple fly effectively imitates a crippled or emerging caddis but all seems to work well enough to imitate a struggling March Brown mayfly. Given the fact that the water hasn’t been gin clear probably helps us out – the fish have responded well to anything even remotely close to the real thing. 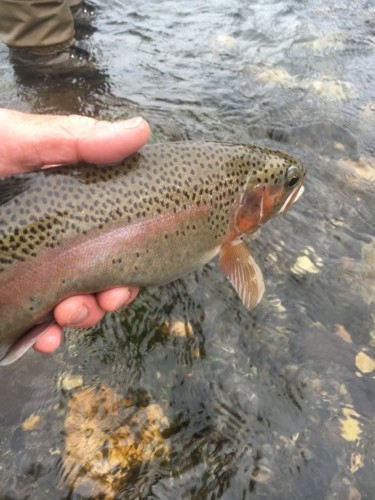 Due to cold temps at night, the best hatch activity has occurred mainly after lunch, prior to that we’ve found success fishing a big attractor dry with a #16 soft hackle hare’s ear, pheasant tail or king prince fished as a dropper. By mid afternoon, March Brown Sparkle Duns, Green Drake Para Wulffs ( used to imitate the March Brown), x-caddis, Goddard Caddis and Royal Trudes sizes #10-16 have been the ticket.  Hatches haven’t been thick which works to our advantage as each floating insect is highly sought after – if and when the caddis get thick (the Mother’s Day Caddis can literally form a blanket of insects on the water’s surface) one is wise to switch to something oversized to separate from the crowd. Oddly enough, large Royal Wulffs and other such fare often outproduce traditional caddis patterns if and when the hatch gets in full force. Until then, matching the hatch should work well.