Since the arrival of snow and cold temperatures in early November, Bozeman has had a good dose of winter weather thus far. Aside from a few warm days around Thanksgiving, we’ve had a pile of snow and a plenty of chilly temps. As for open water fishing, this weather limited our options – most any of our local rivers are lined with shelf ice and pretty well choked with floating slush and ice as well. From what I’ve seen, the Yellowstone, Lower Madison and Gallatin are all unfishable for now. If one just had to go…the Paradise Valley Spring Creeks would be an option as would be the Missouri and Big Horn.

Realistically, the best bet right now is accepting and embracing the conditions and fishing accordingly  – it’s time for the auger, a few jigs and a jar full of maggots. Good ice is forming on most all of our local ponds, lakes and reservoirs and most early ice fishing reports I’ve heard have all been pretty good. 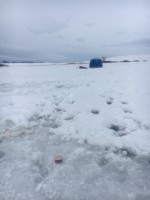 Until the weather warms a bit and the ice situation improves on the river, ice fishing will prove ample entertainment and provide some excellent table fare weather it’s perch for the fryer or trout for the smoker. Of course, winter is also prime time for tying flies, for restocking the boxes and preparing for next season which will be here before we know it.

Tying flies is therapeutic to me – not only can I produce something that I will use to catch fish but I can also think and let the mind wander as I’m doing so. As I was cranking out a batch of Pheasant-Tail Nymphs yesterday afternoon, I reflected on 2017.

Simply put, the 2017 fishing season was a good one. In general, water and river conditions were good and coupled with good weather, fishing was consistent from March to early November. Though not one obsessed with trophy hunting, we did manage to boat the two largest fish I’ve run across on the Yellowstone in 21 years of guiding. A 26″ rainbow in early July and a brown trout that measured nearly 27″  in August. Against all odds, the huge brown ate a #14 hopper during the middle of the day. I’d love to say that skill was a massive factor in both of these instances – more than anything I attributed each fish to time on the water, meaning that after countless days and hours on the river, odds are that something like this is going to show up sooner or later. 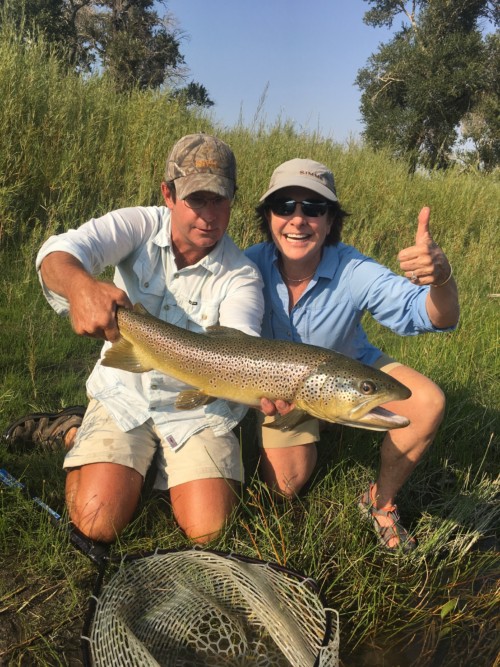 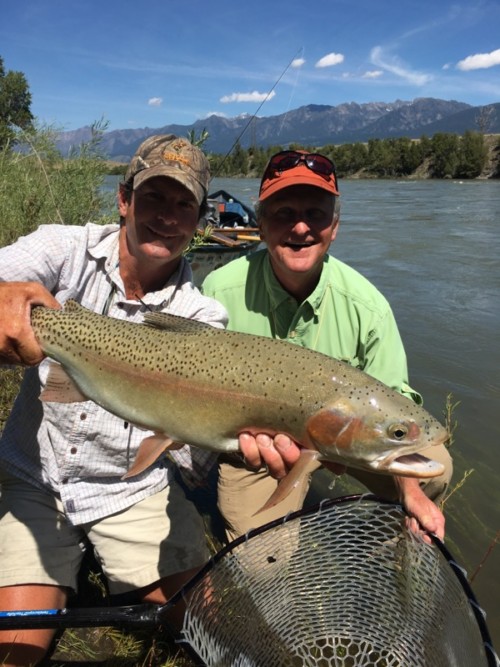 Until 2017 I had never put a 26 inch fish in the boat. 2 in one season certainly took me by surprise. Also shocking, not because of skill but due to the random nature of it all, were that the fish were caught by the husband and wife duo – Jim and Lela Smith.

2017 was a busy year on the river. Summer months seemed to bring people out of the woodwork and many of us were left scratching our heads, wondering if this was a sudden glimpse of the future. Perhaps it is, maybe not. Most likely, the trend will be that traffic will continue to grow as we go forward. Seems obvious. As one who seeks solitude, I found myself struggling with a busier fly shop and boat ramp scene with fear that this would greatly change my experience on the water. Interestingly enough, my days on the river were as good, if not better, than any year in the past 20. Though the boats were there, I rarely saw them and the fish didn’t seem bothered in the least. With forethought, effort and attention to the unwritten rules of etiquette, there is no question that the experience on the river can continue to be excellent in spite of an increase in people.

The snow is falling as we speak – our snowpack is good and continues to build – this bodes well for river conditions for next year. Having taken the last two months to catch my breath, to hunt and to spend time with my family, I’m building steam and looking forward to getting the New Year underway. Can’t wait – 2018 is the year of the 30 incher!