It’s been quite a summer thus far – what started as a cool, even wet July changed drastically – its been hot and dry for quite a while now. Really hot and super dry. Yes, the conditions are taking their toll on our rivers. Many stretches of water in the area are under “hoot owl” fishing restrictions, meaning fishing is open 12am to 2pm….with the idea being that the fish get a break during the heat of the day when water temps are highest and potential for harming fish is greatest. As of yesterday, the Jefferson was closed to all fishing as were certain sections of the Big Hole and Beaverhead. There is a fire in Missoula. It was 98 degrees today. Whoa – seems grim. Is it? 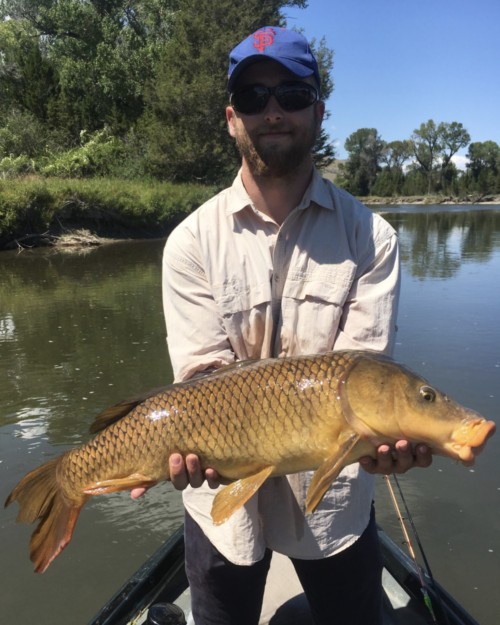 Well, to be perfectly honest, conditions aren’t exactly what we trout anglers dream about – we could certainly use a cool down as well as some rain. Looks like tomorrow some cooler weather sets in, lets hope so. Either way, in spite of the heat wave, fishing has been not only hanging in there but surprisingly good. From some outstanding carp action to some of the better hopper fishing than I’ve seen on the Yellowstone in a couple seasons I’ve been consistently pleased with how well the rivers have been fishing in spite of the weather. Without any question, the coolest hours of the day seem best, but not always – just a few days ago my best fishing of the day occurred between 4 and 5pm on the Yellowstone. One never knows.

About a week ago, we stumbled into this oddly colored brown trout. Perhaps sunburned. Looked like someone had spilled clorox on him. Weird. Check this guy out. 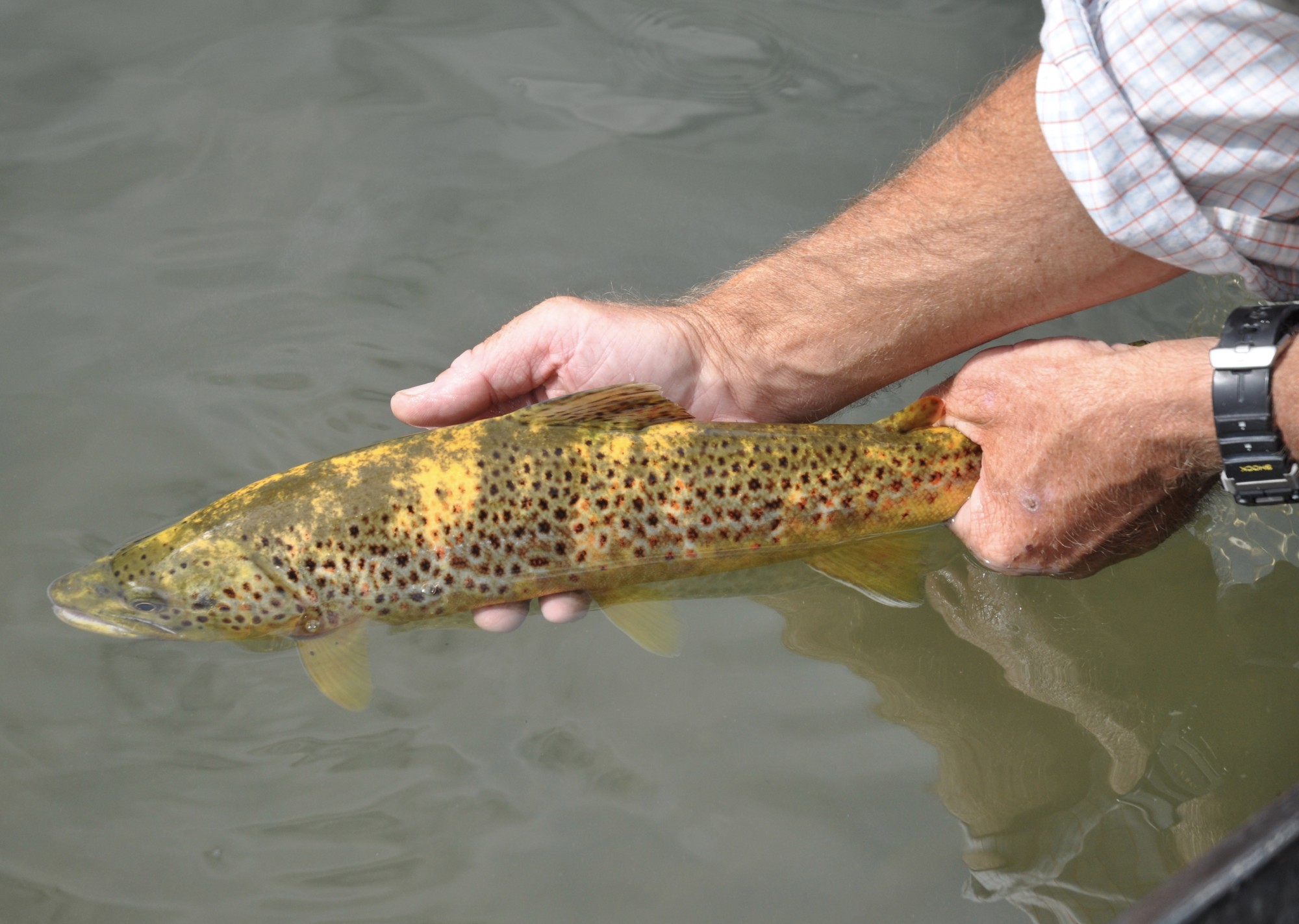 From everything we could tell, this fish was perfectly healthy – no fungus – it fought hard and took off with ease. I can only guess that it was some sort of oddball genetic mutation. Maybe global warming. Who knows.

Speaking of climate change, a topic that seems to be out and about these days is that of smallmouth bass in the Yellowstone River. Well, we caught one the other day – the second that has come aboard the Pequod in the last 15 years. This fish, caught near Columbus, MT had mostly likely moved up from the lower reaches of the river where bass and other warm water species, such as walleye and pike, are plentiful. Having fished this stretch of the river many, many times in the past few summers and this being the first bass caught in quite some time, I’m not of the opinion that there is a problem. Only time will tell. It tasted great. 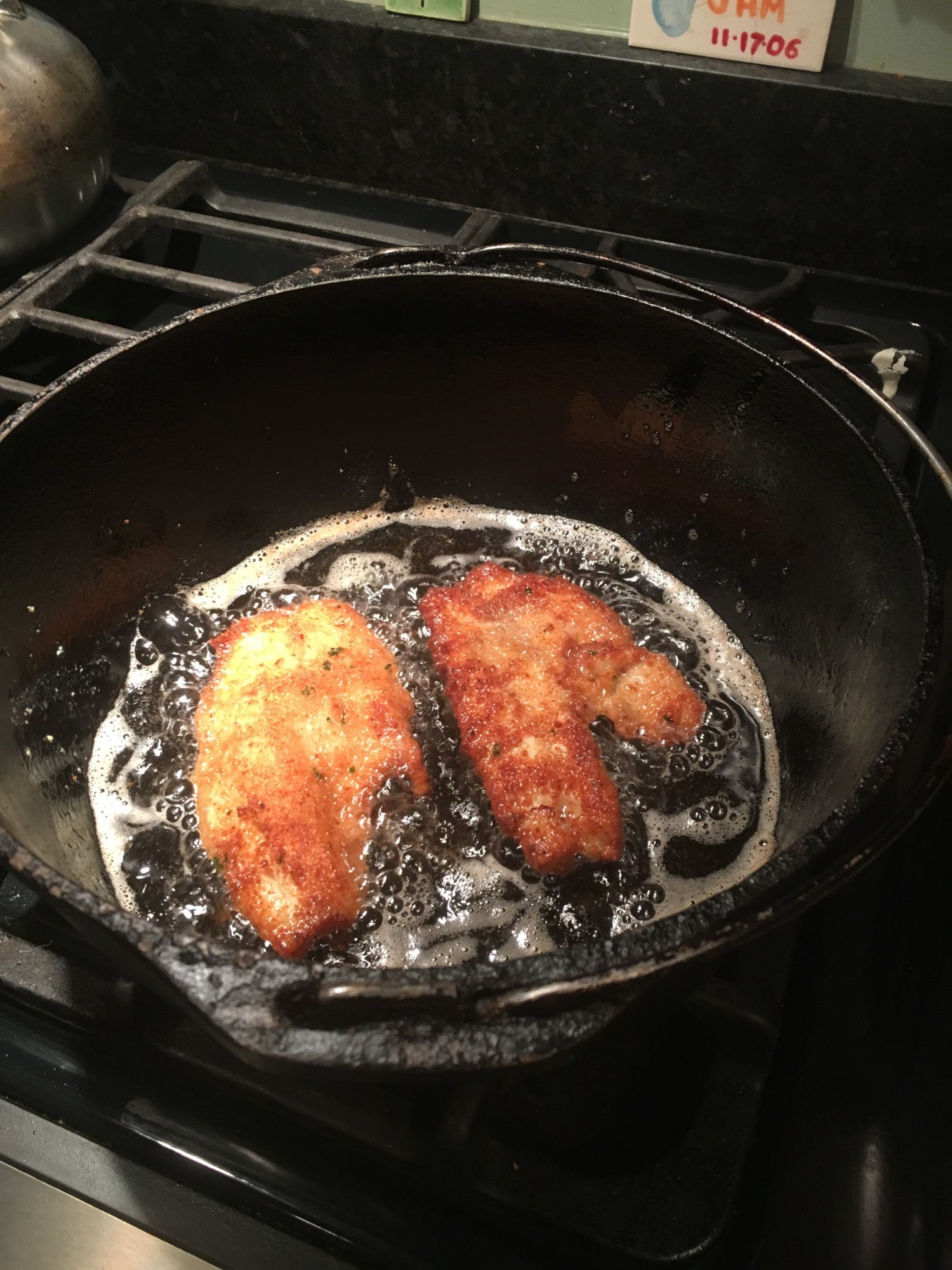 Ah, summer – always an adventure. Who knows what a day on the river might bring. Might be carp on streamers, bass on crawdads, rainbows on hoppers or browns on olive zonkers. I’ll be headed to the upper Yellowstone tomorrow  – time to try our luck with some cutthroats. With temps predicted to be only 80, I’m confident that the fish will breathe a sigh of relief and strap on the feedbag. We’ll see. Winds are predicted to be strong with gusts to 45mph. Could be the perfect time for the new flying ant pattern I’ve been working on.  Might not be too, who knows.